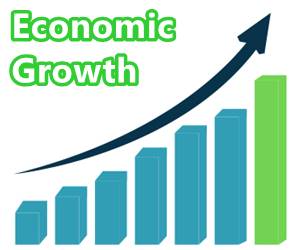 Economic growth Rate describes an increase in the quantity and quality of the economic goods and services that a society produces and consumes.

From the long-term perspective of social history, we know that economic prosperity and lasting economic growth is very recent achievement for humanity. In this entry, we will also look at this more recent time and will also study the inequality between different regions – both in respect to the unequal levels of prosperity today and the unequal economic starting points for leaving the poverty of the pre-growth past.

Why Economies Expand or Contract

Economic growth can be boosted by several factors and events. Most commonly, increases in demand for products lead to corresponding increases in production. The net result is more income.

The date marked the 10th year of the U.S. economic expansion, the longest in the nation’s history.

In any of these cases, the influx of income, if big enough, causes an increase in the economic growth rate.

An economic contraction is a mirror image. Consumers pull back on spending, so demand falls and production falls with it. In the worst-case scenario, the effects snowball. As production falls, jobs are lost. Demand falls further. GDP for the quarter comes in at a negative number.

The large impact of a relatively small growth rate over a long period is due to the power of exponential growth. The rule of 72, a mathematical result, states that if something grows at the rate of x% per year, then its level will double every 72/x years. For example, a growth rate of 2.5% per annum leads to a doubling of the GDP within 28.8 years, whilst a growth rate of 8% per year leads to a doubling of GDP within nine years. Thus, a small difference in economic growth rates between countries can result in very different standards of living for their populations if this small difference continues for many years.