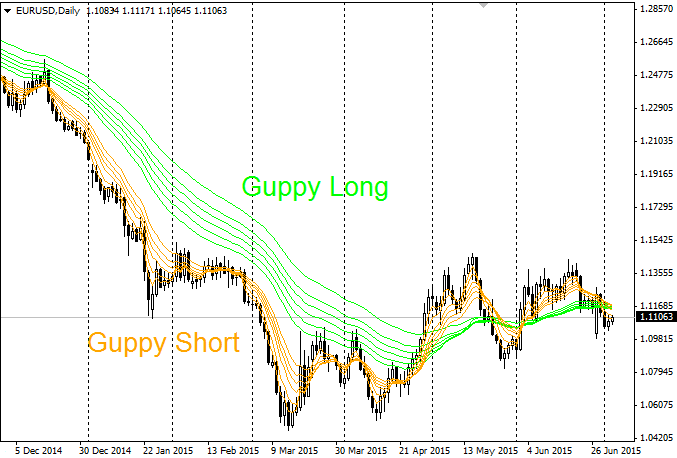 This indicator was developed by Daryl Guppy. It is composed of 6 EMAs of 3, 5, 8, 10, 12 and 15 periods which give you the direction and the strength of the short-term trend, the speculator trend. It is used in combination with another group of six EMAs which measures the direction and the strength of the long-term trend or the big-investor trend. This group of EMAs are 30, 35, 40, 45, 50, 60 periods like Daryl Guppy say for the daily timeframe. This indicator was made to analyze and trade on daily timeframe charts but can be used in other timeframes, like M15 or H1, with the same periods and setups.

I made these indicators so you can change the type of Moving Average, the period and applied price, i.e: the high, low, open, close, typical and weighted price of the bars used to calculate the moving averages. You can change it on your own to trade in another timeframe that you feel more comfortable with or to make the indicator more sensitive to little changes of the current trend.

Both groups of EMAs can be used to measure the agreement or disagreement of these two types of traders: investors and speculator. This gives you a better understanding of this fight between them and the possibility of better entries in favour of the current trend or imminent changes on it.

I must say that when the two groups of EMAs are parallel and close together, both among themselves and between groups, investors and speculators are largely in agreement and a big move is very close. As I have read in “Market Wizards”, it is like when in the past in a very crowded Wall Street the room was seized by silence with motionless prices, and a little time after, a wild move on them made people turn euphoric.