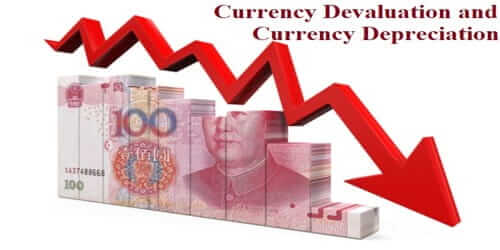 Countries with weak economic fundamentals, such as chronic current account deficits and high rates of inflation, generally have depreciating currencies. Currency depreciation, if orderly and gradual, improves a nation’s export competitiveness and may improve its trade deficit over time. But an abrupt and sizable currency depreciation may scare foreign investors who fear the currency may fall further, leading them to pull portfolio investments out of the country. These actions will put further downward pressure on the currency.

Currencies always trade in pairs, with the value of one quoted against the other. The first listed currency – the base currency – is always worth one. While the second currency’s value – the quote currency – is about this.

If the price of GBP/USD rises from 1.2700 to 1.5000, the dollar would be said to have depreciated, and the pound would have appreciated – as you would now need more dollars to buy the same number of pounds. This might also be referred to as the pound becoming stronger and the dollar becoming weaker.

Some real-life examples of currency depreciation include the impact of the 2016 Brexit referendum on the value of the British pound – which experienced significant volatility and at times depreciated rapidly against the dollar. A more dramatic historical example happened in Asia in 1997 when the collapse of the Thai baht affected most Southeast Asian currencies and caused their value to decline sharply.

What causes a currency to depreciate?