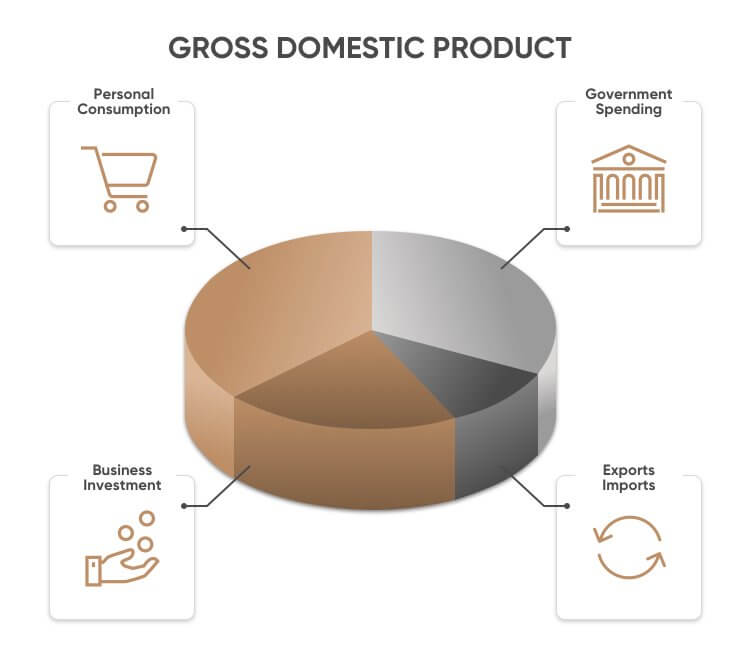 Gross domestic product (GDP), the total market value of the goods and services produced by a country’s economy during a specified period. It includes all final goods and services—that is, those that produce from the economic agents in that country regardless of their ownership. Moreover, it is used throughout the world as the main measure of output and economic activity.

The formula of gross domestic product

One way gross domestic product (GDP) is calculated—known as the expenditure approach—is by adding the expenditures made by those three groups of users. Accordingly, GDP has the following formula:

or more succinctly short version as

investment (I) refers to business expenditures by businesses and home purchases by households,

government spending (G) denotes expenditures on goods and services by the government,

and net exports (NX) represents a nation’s exports minus its imports.

GDP reports in several ways, each of which provides slightly different information.

Nominal GDP is an assessment of economic production in an economy that includes current prices in its calculation.

The GDP is when comparing different quarters of output within the same year. When comparing the GDP of two or more years, they use real GDP. This is because, in effect, the removal of the influence of inflation allows the comparison of the different years to focus solely on volume.

The real GDP is an inflation-adjusted measure that reflects the number of goods and produced services from an economy in a given year, with prices held constant from year to year to separate the impact of inflation or deflation from the trend in output over time.